The study area is located in the north portion of the La Cantera thrust, 56 km northwest of the city of San Juan and about 30 km of the three major dams along the San Juan River. The aim of this study was to determine some morphotectonic aspects of the area, making direct and indirect analyses of the drainage network and general characteristics of the fault trace, affecting the Holocene units. The drainage design is dendritic, typical of alluvial fans, showing some anomalies that are directly related to the trace of La Cantera thrust. Two types of anomalies were identified: upstream of the fault scarp the network has a broom-shaped river pattern and in the hanging wall, the dendritic network becomes more dense and incised.

We analyzed five natural and artificial trenches, which helped to identify the fault plane, who trends north-south and dips approximately 30°W. Besides, two colluvial wedges were recognized in two trenches that would indicate at least two seismic events. In one of them a level with incipient pedogenesis affected by the fault, could be dated (C14) resulting in an age of 4580 ± 50 BP, suggesting that one of the events occurred after the formation of this level. 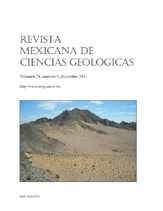